(Not So Classic) Wrath of the Lich King 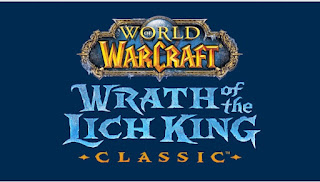 I've been looking forward to the Wrath of the Lich King announcement, certainly more than the announcement of the next regular expansion.

I thought it was stunning though, to have the immediate announcement that there would be no group finder in Wrath because "the community" didn't want it.  What?  Who on earth did they send those Wrath surveys out to? The groups that charge for dungeon runs?

Not to anyone trying to get a dungeon group together.  I'd be fine if it came out later in the expansion as it originally did.

I am enjoying playing this older version of the game partly to see it all unfold as it originally did.  I think it gives a perspective in real time of the changes made to the game over the years.  Maybe things were better, maybe they were worse.  But you get to see those changes.

Suddenly, they've hit a mark where it doesn't have to be the way it was.  It will be the way "the community" says they want it.

I also find the suggested changes to the Barbershop somewhat disturbing for the same reasons.  Eep, are they going to use the new facial models?

So this morning, very early, I'm thinking maybe I'm done with Classic once Wrath comes out, because it won't be classic at all.

😞 I have been eternally whiny that I didn't get the "Community" survey asking about Wrath Classic. It turns out I did get it...

Adventures in Azerothian Realms and Beyond